The First Generation of X5, with the chassis code E53, made its debut in 1999, Since 1999, the BMW X5 is the third Generation which is perfect on and off the Road. This Sports Activity Vehicle (SAV) Luxury car has many technologies that elevate efficiency, driving dynamics, comfort, and versatility to a whole new level.

This is the new BMW x5 the latest version of the car that first proved SUVs can actually be fun to drive. It’s
the largest BMW SUV you can buy until the new x7 arrives in November. the new x5 will compete with the likes of the Land Rover Discovery.
BMW seems to have swapped its famous kidney grille prepare of flared nostrils flanked by standard LED headlights. the crease that runs along the x5 sides gives it the broad shoulders of a rugby player. But the sweeping roofline means it looks sportier than the SUVs of this size.
Also Read:

Engine–  The new BMW x5 is available with a choice of six-cylinder engines two days old and one pet shop, and all models come with an 8-speed automatic gearbox as standard. The 30 Day diesel is likely to be the most popular, it produces 265 horsepower getting the x5 from naught to 60 2 miles an hour in 6.5 seconds and returning fuel economy of up to 47 points one mile per gallon.

The 4t petrol is quicker, it gets from naught to 62 in just 5.5 seconds but only returns a fuel economy of thirty-three points two miles per gallon. Meanwhile, the range-topping m50d diesel produces 400 horsepower courtesy of no less than four turbochargers and it can get from naught 62 miles an hour in 5.2 seconds but can still return fuel economy of more than forty miles per gallon.

Interior- Inside the new x5 shares it’s interior design with the 5 Series. The dashboard angles towards the driver and it’s dominated by a huge sat-nav screen that sits on top of the dashboard. All models get a leather interior with contrast stitching while M Sports versions add sports seats, a sporty steering wheel, and aluminum trim pieces.
Entertainment– it comes with two huge high-resolution 12-inch displays and the latest version of BMWs operating system that’s been designed to help you concentrate on the road when you’re driving and not be too distracted by the tech. it can be controlled by the touchscreen or by using BMWs fix iDrive control system between the two front seats. The system also recognizes voice commands and gesture controls.  it has a built-in sim card so you can browse the internet or the optional connected package professional adds a live traffic update and a concierge service at your beck and call. 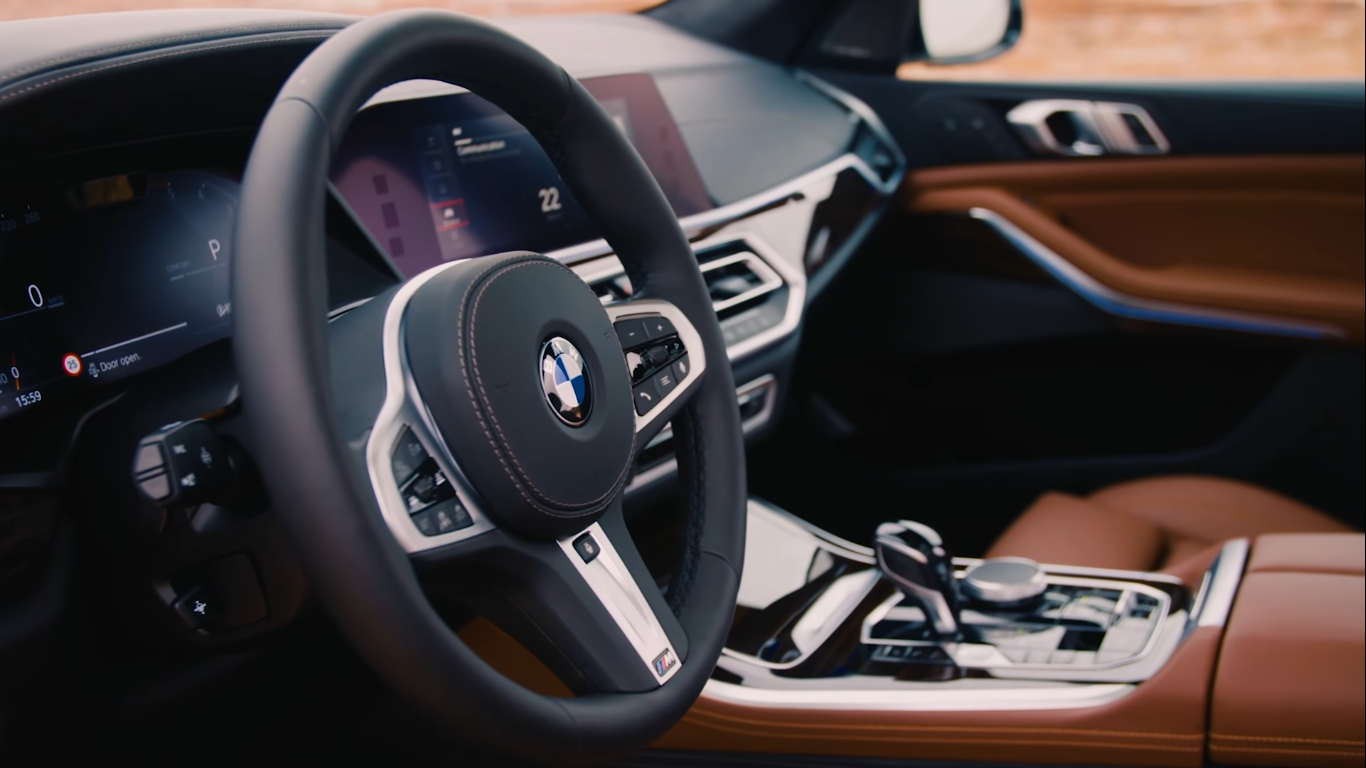 Practicality-  the space between its front and rear wheels is 42 millimeters greater and that means the new x5 has much more rear legroom than the car it replaces. You can still choose to have five or seven seats and there’s650-liters boot will happily everything you need for a family holiday. The x5 has an 1860 liter total capacity when you fold all the receipts away and the splitting tailgate means you can slide heavy loads in place nice and easy. Also, the boot has a low cover which can be hidden away electrically.

Aerodynamics- The BMW x5 has excellent aerodynamics for an SUV to help you get the best of the fuel economy. thanks to things like a boot mounted spoiler and a grill that can close to reduce drag at speed, the x5 is actually more aerodynamic than the McLaren f1.

Driving- BMWs are supposed to be the ultimate driving machines, even the SUVs. That’s why the new x5 has double wishbone front suspension and multi-link rear suspension, as that should make it fun to drive for such a big heavy SUV. Adjustable dampers come as standard say confirm at the suspension at the touch of a button. Air suspension is optional if you prefer an even more comfortable ride the standard xDrive four-wheel drive system is designed to make the x5 feel as though it is rear-wheel drive.  The optional electronically controlled limited slip differential to give you lots of grip to power out of corners.

Self Driving Tech– While the x5 should be fun to drive you can also expect it to be pretty good at driving itself.  if you specify the driver assistance professional package, the pack buys you a bunch of acronyms, that means the x5 can drive itself down the motorway and in heavy traffic queues.  it can also break the car automatically if you reverse into traffic and steer the car back into position if you drift out of your lane on the motorway.

Off-Roading- If your fancy scraping your expensive SUVs paintwork while off-roading, then the optional off-road package should at least mean you’re less likely to get stuck, includes preset driving modes for sand, rock, gravel or snow. And the pack bundles together the optional air suspension for extra ground clearance and the electronically controlled rear differential lock for more grip on slippery surfaces.